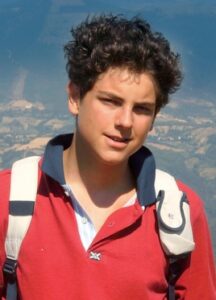 Carlo Acutis, a 15 year old Italian was named Blessed at a Mass of Beatification in Assisi on October 10th, 2020. Though young, his short life is put before us an example of someone who tried to live his faith as fully as possible. Having received his First Holy Communion at the age of seven, he received Holy Communion frequently and spent time in prayer before or after Mass in the presence of Jesus in the Holy Communion in the tabernacle. He went to confession once a week.  He had a deep interest in the lives of the saints. He loved computers. He loved to travel, especially to Assisi. He contracted leukemia and offered his suffering for the Church and for the Pope. During his illness he used his computer skills to make a website dedicated to the miracles of the Eucharist. He completed this in 2005. He died on October 12th, 2006 and is buried in Assisi. Not long after his death, requests were made for him to be declared blessed/beatified. On May 13th, 2013 he was named a Servant of God which is the first step on the way to being named a saint of the church. To progress to the next step and be named Blessed, an authentic miracle which can be officially verified by the Church is required. A Brazilian mother, Luchiana Vianna whose son Mattheus was born with a pancreatic defect had prayed to Carlo to intercede for her son’s healing. After thorough investigation, this miracle was accepted as authentic and led to Carlo Acutis’s beatification. Because of his love of computers, he is being spoken of as ‘Patron Saint of the Internet’ It is a cause of great joy for the whole Church, that the holiness of such a young person who lived so recently be recognised and promoted.

‘To be always close to Jesus, that’s my life’s plan.’ – Carlo Acutis

Father, who has given us the ardent testimony of the young Blessed Carlo Acutis who made the Eucharist the core of his life and the strength of his daily commitments so that everybody may love You above all else, let him soon be counted among the Saints in Your Church.

Confirm my faith, nurture my hope, strengthen my charity, in the image of young Carlo who growing in these virtues, now lives with You.

Grant me the grace I need (Mention your request here)

I trust in You, Father, and your Beloved Son Jesus, in the Virgin Mary, our Dearest Mother, and in the intervention of Blessed Carlo Acutis. Amen.

Our Father, Hail Mary and Glory be to the Father….

‘The Eucharist is the highway to heaven.’

‘To be always close to Jesus, that’s my life’s plan.’