Completed in 1828, St. Mary’s Parish Church, Dungarvan was refurbished in the 1870s including the installation of the stained glass windows. The three windows behind the sanctuary are the work of Meyer and Company Munich and the side windows are of Wailes and Strange of Newcastle-on-Tyne. 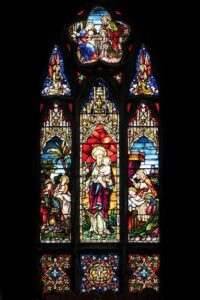 St. Joseph features in a number of the stained glass windows. To the right of the altar, the window is dedicated to St. Joseph. The top window portrays the Holy Family with St. John the Baptist. The Virgin Mary sits on the left holding the Baby Jesus. St. Joseph stands to the right, holding his staff and in front of him is St. John the Baptist as a child, dressed in a rough tunic. The Child John points to the Child Jesus and above John flutters the words ‘Agnus Dei’, the Lamb of God as John addresses Jesus when Jesus goes to the River Jordan for Baptism. St. Joseph stands as guardian of the Holy Family.
Beneath this window, the two triangular panels are angels in adoration of the Holy Family. 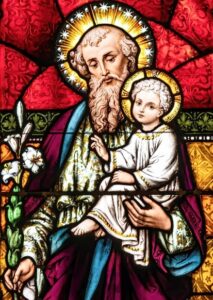 The central window panel depicts St. Joseph with the Child Jesus close to his heart. St. Joseph holds a lily in his hand. According to legend, when the Virgin Mary reached marrying age, her father Joachim was unsure as to who she should marry. The high priest suggested that each of her suitors would leave his staff on the altar of the Temple, and a sign from heaven would indicate the man she would marry. When Joseph placed his staff on the altar, lilies sprouted from it and he married the Virgin Mary. Like the imagery of Our Lady, St. Joseph holding a lily indicates his chaste marriage to Mary. 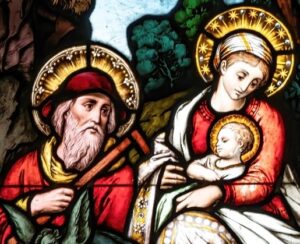 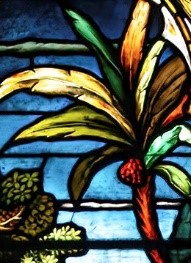 Left of the central panel is the Flight into Egypt. St. Joseph, whose face portrays his anxiety, leads the way into exile, whilst the tender Virgin gazes with a love beyond all telling at the sleeping infant. Behind them is depicted the palm tree which according to legend bent down so Joseph could pick its fruit to feed his family on the dangerous journey to Egypt. 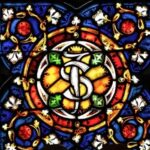 The right panel portrays the Death of St. Joseph, Christ raises his hand in blessing of his earthly father whilst Our Lady weeps at the death of her beloved husband. Beneath the three large panels are three square windows. The middle window has an intricate interlaced S and J honouring St. Joseph to whom this beautiful set of windows are dedicated. 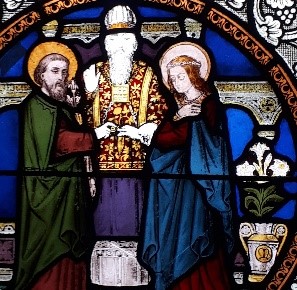 The windows left to Our Lady’s shrine contain different images of St. Joseph in the life of Jesus before his public ministry. The middle window in the left panel contains the Betrothal of St. Joseph and the Virgin Mary before the High Priest. St. Joseph holds the ring he will place on Our Lady’s finger who stands next to a vase of lilies, again symbolising their chaste and pure marriage.

The next window’s top right window shows the Visitation of Our Lady to her cousin Elizabeth; although the account of the Visitation does not mention Joseph accompanying Mary to Judah, the stained glass window depicts Joseph and the donkey standing in the background as Mary and Elizabeth embrace. 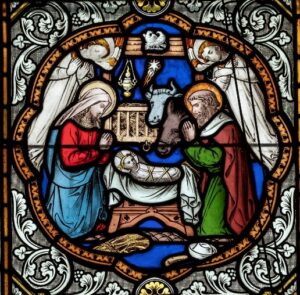 The window beneath is the Nativity Mary and Joseph kneel in prayer as the angels hover above in adoration. The cow and donkey, representing all of creation gaze upon the holy infant. A thurible with burning incense hangs from the stable beam signifying the presence of God, while the two doves represent peace on earth. The Star of Bethlehem shines bright. The next window is the Adoration of the Shepherds who bring a tethered lamb to the new infant. As his Mother shows the baby to the shepherds, St. Joseph stands behind them, his hands clasped in prayer. 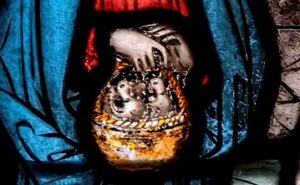 The windows of the left panel begin with the Presentation of the Child Jesus in the Temple. Mary and Joseph present the Child Jesus to God as Simeon and Anna prophesy what awaits this Child and the sorrows that will pierce the Mother’s heart. Mary holds the two doves, which Joseph, as a poor man, presents before the altar. 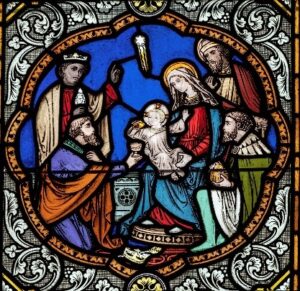 The middle window is the Adoration of the Magi. The Three Wise Men, guided by the Star offer the Child Jesus their gifts of gold, frankincense and myrrh. The two kings kneeling have removed their crowns in acknowledgement that Christ is the King of Kings. Mary enthroned, holds the Baby Jesus on her lap and Joseph stands behind them as guardian of the Holy Family. 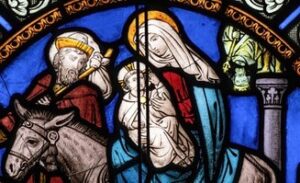 The third window left to Our Lady’s shrine begins with the Flight into Egypt. Later legends claimed that as the Holy Family entered Egypt to escape the wrath of King Herod, the Egyptian gods fell from their pedestals in the presence of the Child who is God. 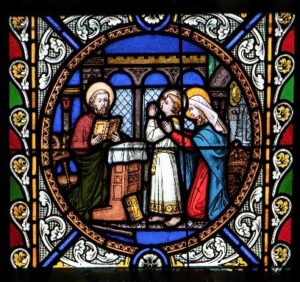 The middle window is the Finding of Jesus in the Temple. Jesus stands among the teachers of the Law. Our Lady and an elderly St. Joseph stand to the side, perplexed by Jesus’ answer that he is about his Father’s business. 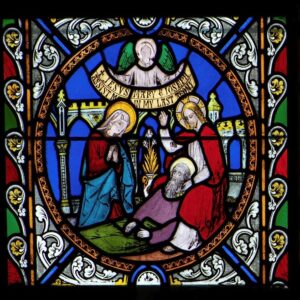 The third window is the last one to feature St. Joseph. It is the Death of St. Joseph, lying in the arms of Jesus whose hand is raised in blessing of his earthly father. Our Lady prays for her husband. Between the Virgin Mary and St. Joseph there is a vase from which grows the lily of purity, symbolising the chaste marriage between the holy spouses. Above them an angel holds a banner which reads ‘Jesus, Mary and Joseph, Assist me in my last Agony’, a fitting prayer to the saint who is the patron of a good death.

Prayer For A Happy Death

The information above can be printed at the link below: 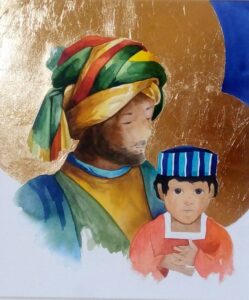 To celebrate the Year of St. Joseph as we approach the Feast of St. Joseph on the 19th March; the Diocese of Waterford and Lismore has produced a Prayer Card and a Novena to St. Joseph which is available in St. Mary’s Parish Church.

The image of St. Joseph and the Child Jesus, painted for the Year of St. Joseph is an original watercolour by Sr. Blandine Elisabeth of the Sisters of Mary, Morning Star in Waterford City.

A community of contemplative nuns, Sisters of Mary Morning Star were founded in Spain in 2014 as Las Hermanas de Maria Stella Matutina. Bishop Cullinan invited the Sisters to establish a community in Waterford and the Sisters came among us in January 2019.

The Sisters live a contemplative life in the heart of Waterford city in the Franciscan Friary, Lady Lane. Their life is dedicated to prayer, fraternal charity and the search for truth. Sisters of Mary, Morning Star consist of two hundred and fifty Sisters worldwide with Waterford as their only Irish community. There are six sisters living in the community, with one Irish girl currently considering a vocation with the Order. 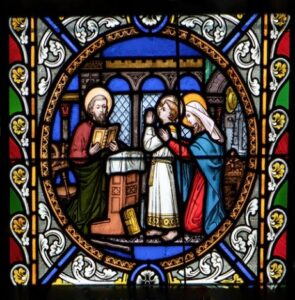 In his Apostolic Letter ‘Patris corde’ (“With a Father’s Heart”), to mark the Year of St. Joseph, Pope Francis describes Saint Joseph as a beloved father, a tender and loving father, an obedient father, an accepting father; a father who is creatively courageous, a working father, a father in the shadows.

A Father who Teaches the Value, Dignity and Joy of Work

“A carpenter who earned an honest living to provide for his family,” is how Pope Francis describes St Joseph, who also teaches us “the value, the dignity and the joy of what it means to eat bread that is the fruit of one’s own labour.” This aspect of St. Joseph’s character provides Pope Francis the opportunity to praise those who work for a living, to take care of their families. Pope Francis speaks of every person having the right to dignified work. Work, the Pope says, “is a means of participating in the work of salvation, an opportunity to hasten the coming of the Kingdom, to develop our talents and abilities, and to put them at the service of society and fraternal communion.” Those who work, he explains, “are cooperating with God himself, and in some way become creators of the world around us.”

A Father “in the Shadows,” Centred on Mary and Jesus

Pope Francis describes St. Joseph’s fatherhood of Jesus as “the earthly shadow of the heavenly Father.” “Fathers are not born, but made,” says Pope Francis. “A man does not become a father simply by bringing a child into the world, but by taking up the responsibility to care for that child.” Pope Francis describes a good father as raising his children to be “capable of deciding for themselves, enjoying freedom and exploring new possibilities.”
This is the sense in which St. Joseph is described as a “most chaste” father, because he knew how to love which never made him the centre of things. He did not think of himself, but focused instead on the lives of Mary and Jesus. Happiness for St. Joseph involved a true gift of self: “In him, we never see frustration, but only trust,” writes Pope Francis. In this sense, says Pope Francis, a father realizes that “he is most a father and an educator at the point when he becomes ‘useless,’ when he sees that his child has become independent and can walk the paths of life unaccompanied.” Being a father, the Pope emphasises, “has nothing to do with possession, but is rather a ‘sign’ pointing to a greater fatherhood”: that of the “heavenly Father”.

A Prayer to St Joseph

Pope Francis concludes his Letter with a prayer to St Joseph, which he encourages all to pray;

Hail, Guardian of the Redeemer,
Spouse of the Blessed Virgin Mary.
To you God entrusted his only Son;
in you Mary placed her trust;
with you Christ became man.
Blessed Joseph, to us too,
show yourself a father
and guide us in the path of life.
Obtain for us grace, mercy, and courage,
and defend us from every evil. Amen.

The information on this webpage can be printed at the link below along with Part 3, Part 2 and Part 1;

The Year of St Joseph Part I